A few weeks ago, the BBL told you how Legion FC’s President Jay Heaps could be focusing his recruiting efforts on five potential coaching candidates. And while we are convinced that at least one of these candidates is a serious contender for the job (think Philly Cheesesteak!) – the BBL also also realizes that there may be other high quality candidates that are currently unavailable that may soon be looking for work.

As you may (or may not) know – Major League Soccer is looking to add one more team to its cohort of clubs. Miami and Nashville were recently welcomed into the league to much fanfare across the country. Adding both markets to the MLS was a strategic move that will saturate soccer fanfare in the South.

But there is one more MLS expansion spot available and three cities are vying for the opportunity to play footy at the highest levels in the US: Cincinnati, Detroit, and Sacramento.

According to the oddsmakers, Cincinnati is the leading contender for the spot.

MLS President and Deputy Commissioner Mark Abbot recently commented to SI.com, “Although we haven’t finalized any deals, and all of the finalist markets remain under consideration, we’ve made the most progress in Cincinnati.”

Placing a MLS expansion team in Ohio certainly makes sense, especially if the league presses on with its intentions to move Columbus Crew to Austin, TX (#savethecrew).

A new chapter in Portland

When Caleb Porter announced that he was leaving the Portland Timbers after an early exit from the 2017 MLS Cup Playoffs, many around the MLS and soccer media speculated that Porter himself had his next job already lined up.

Timbers owner Merritt Paulson issued a prepared statement upon Porter’s departure: I respect Caleb’s decision to seek his next challenge. He leaves Portland with a lasting legacy valued by everyone associated with he club, and I wish him nothing but success in the future.

So far just crickets, right? No word on Porter’s next gig.

Pipe down Legion FC fans – Porter isn’t coming to the Magic City (just yet). But keep following me here.

What job is Caleb Porter rumored to be first in line for? You guessed it: a newly minted FC Cincinnati in the MLS.

But why? Caleb Porter cut his teeth as an assistant coach at Indiana University, but rose to fame as the head coach of Akron University in Ohio, where he won the 2010 National Championship. A return to the area is not so far-fetched. 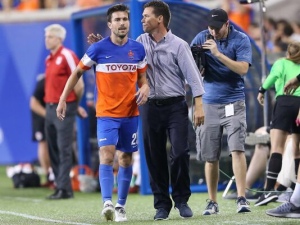 Where do all of these rumors leave current FC Cincinnati coach Alan Koch? More than likely, he’s a little squirmy in his seat up there in the Rust Belt. His club might be moving to MLS. A proven MLS Championship-level coach is rumored to be interested in taking over the reigns.

Yeh – Koch has to be considering all of his options.

Truly a shame for Cincinnati too, right? In 2017, Alan Koch led the club to a season total 46 points (6th place in the East) and a second straight playoff birth in addition to the US Open Cup run for the ages, ultimately losing in the semifinals.

Koch is known for spotting and developing young talent. He holds successful USL managing stints in Vancouver along with current club Cincinnati.

Smart Bham BackLiners, take note: if one day not too far from now, you see a scrolling blurb on ESPN about FC Cincinnati being awarded the 26th franchise in MLS, just know that the likelihood of Alan Koch heading south to the Heart of Dixie just became very likely.

Is there a possibility that Koch is the first man to lead Legion FC’s club in the 2019 USL season? The answer is a resounding YES, but I will leave you with this video and a quick thought:

FC Cincinnati was able to build a true, passionate footballing atmosphere in the USL in under two years. The two coaches (Koch and John Harkes) that they had during that span are both very much in play for the head coaching position in Birmingham.

Jay Heaps is on a mission to build a successful franchise in the Magic City. If that doesn’t get you excited about 2019, I’m not sure what will.