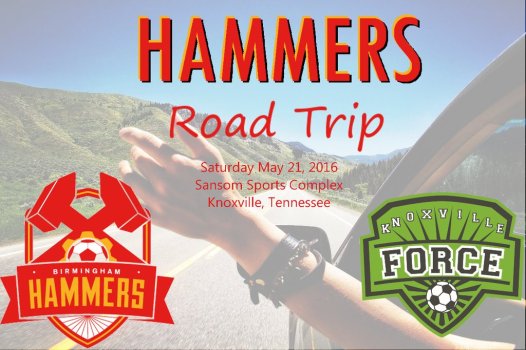 Pack your bags folks. The Boys in Red are road-tripping to Knoxville this weekend. The shadows of the Smoky Mountains beckon. But this ain’t no Holiday Road. The Hammers (0-0-1) take on the Knoxville Force (0-0-1) with the mission of atoning two losses from last year’s exhibition season. With three points in the NPSL Southeast Conference on the line, the Hammers will hope to return to their winning ways at the Sansom Sports Complex, in front of a hostile crowd, at 7 PM EST / 6 PM CST.

For those that have short memories, there is no love lost between these two clubs after last year, specifically after a contentious second leg match at the SHAC on May 30th, 2015. The Knoxville Force was seemingly in control of the game, leading 3-1 deep into the second half. The Hammers’ conditioning proved to be superior, however, and the Force’s tired legs struggled to maintain possession. Many fouls and free kicks later, the Hammers scored on a 90th minute corner kick. Victor Sambade skied over a Knoxville defender and slammed a header off the pitch into the back of the net. 3-2.

A flurry of Hammers offensive possession followed as injury time ran deeper and deeper. The 94th Minute. The 96th Minute. The 98th minute. When would the sand in the hourglass run out? A free kick from inside the Knoxville 18-yard box due to a strange, seldom-called foul against the Force goalkeeper gave the Hammers one last chance to draw even before the final whistle blew. It was not meant to be. Pride was swallowed. For on that sweltering night in the Magic City, the patrons clad in green and black were the victors. And so go the spoils.

And for those of you in the soccer bubble like me, here is that entire game for your viewing pleasure:

This year’s matchup brings with it a sudden sense of urgency for both teams. Neither club wants to be sitting at the bottom of the table after two league matches with no points to show. Neither club wants to continue their losing ways. Its not just pride that the Hammers and Force are playing for this Saturday. The victorious team moves forward from this weekend with optimism and 3-points in their pocket. The loser continues to dig their hole deeper.

Stay tuned to the BBL for my specific predictions on this matchup, possible streaming options for those of you who are not able to make the game, and a road trip itinerary for those that will be driving to Rocky Top in the family truckster.

And lastly – check out the best opening sequence to a movie ever made… you can thank me later for this song being stuck in your head all week. Long Live Lindsey Buckingham!