If you are a Soccer Bubblite, there is really no reason you should not be at every Hammers home game. But if you are new to the sport, or maybe even have a kid that plays, here are the top 10 reasons you should consider coming out to support the Hammers in the upcoming season.

10. If you are a parent of a child between the ages of 4-10, odds are that your child plays youth soccer. Whether it is with BUSA, Vestavia Hills, Hoover, or Trussville, youth soccer is growing exponentially in the Magic City. Take your child to a Hammers soccer match. They can see the speed of the game up close. They will see crisp passing, creative dribbling, imaginative shooting, and pressing defense. Your child will be in awe. They can then meet the players after the game, get autographs, and take pictures. Money well-spent.

9. The Hammers play their games in the months of April, May, June and July. College football is still several months away. But don’t you like a nice tailgate? The SHAC parking lot on a Saturday evening in the Alabama Spring/Summer is the perfect place to set up your grill, crack open a cold one, and quench that tailgate thirst that you have so dearly missed since last fall. No, its not the Quad in Tuscaloosa or Tumors Corner in Auburn. But it will do.

8. We in the Southeast take our sports seriously and our rivalries even more so. The Hammers play in the Southeast conference of the Southern Region of the NPSL. They share this conference with teams from Nashville, Memphis, Knoxville, Chattanooga, and New Orleans. Throw in a couple of teams from the Atlanta area that are on the schedule, and all of the sudden Southeastern bragging rights are on the table each and every game. Birmingham takes a backseat to none of these municipalities. Make sure you show up to support your Boys in Red as they fight for regional pride.

7. You might just get the opportunity to watch the match while sitting next to a professional soccer player. Last year, local soccer success story Chandler Hoffman (formally of the LA Galaxy and Houston Dynamo in the MLS) took in a Hammers match and signed autographs for the kids.

6. The Magic City Brigade will serenade you with their songs, chants and cheers. Just who is the Magic City Brigade? Check them out here. Soccer is not soccer without a great supporters group. If you are interested in signing up to be a part of these top tier Hammers supporters, check out their website here.

5. John Killian and Morgan Copes, along with a few others, started the grassroots effort to bring top-level soccer to Birmingham about three years ago. This effort molded into what is now your Birmingham Hammers. Both guys are genuinely passionate about soccer and the city in which we all love. John is usually manning the PA system at each game while Morgan is hustling around to make sure the logistics of the game are going smoothly. But both men are happy to say hello and talk Hammers soccer with you. So come out to the SHAC this season and introduce yourself.

4. The Hammers’ kit unveiling last season was hugely successful. The 2015 inaugural jersey for the Hammers has been a hot item and many supporters wear it to each match. The classic red-on-red design with the St. Vincent’s Health System logo across the chest and the Hammers shield over the heart  is reminiscent of other classic kits from teams like Liverpool FC. You will have to show up to the game against Sandy Springs FC on April 30th to see these kits in their full glory. And one thing is certain: you should get your hands on a 2015 jersey as soon as you can. These collector items will be valuable many years from now.

3. You will be able to say that you saw some of these players when they were just starting out on their soccer journey. Many of these players are in the dawn of their soccer careers. Not all Hammers players will go on to play higher level soccer, but some will. In fact, a couple of players from the 2015 exhibition team have moved on to exciting opportunities this year. Last September, Hammer goalkeeper Pritchard N’Daria landed a tryout with the USL side Charlotte Independence. The Independence is affiliated with the Colorado Rapids of the MLS. Also, former Hammer and UAB soccer player Willie White was recently called up to play for the Bermuda National Team. It is only a matter of time before one of our Boys in Red makes it to the big stage.

2. What about the players that don’t go on to play professional soccer at a higher level? Well – you should support them too. These men are either in college locally or are professionals and residents of the Birmingham metro area. The Hammers have given them an opportunity to continue to play the game that they love so much. They risk their bodies for months on end so that we can be entertained. They will never ask you to support them, cheer for them, or pat for them on the back. But you should do those things. These Boys in Red should be proud of how they represent our great city and you should let them hear how proud you are of them. 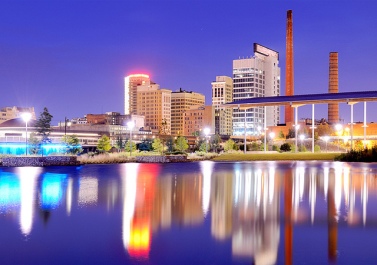 1. Speaking of civic pride, the Hammers are growing up in a time in Birmingham’s history where its citizens have plenty to look forward to. Businesses are moving to town. Once-forgotten sections of downtown are now buzzing with breweries, galleries, theaters, and restaurants. For the first time in a long time, many people are proud to be from the Magic City. And the Birmingham Hammers are playing a role in this resurgence. As the Frugal Footballer has pointed out in his latest post (which I highly recommend reading), the Hammers have the potential to become a driving force that further unites our diverse city. It’s a new age in the ‘Ham. Come watch our city’s soccer team play in 2016. Show this hardworking organization how much you appreciate the work they have done in giving the soccer community of Central Alabama a team to call their own. With your support, anything can happen.

The Birmingham Backline wants to hear your reasons for supporting the Birmingham Hammers and what you are most looking forward to in 2016. Please join the discussion in the comment section below or hit us up with a tweet at @bhambackline.