The Birmingham BackLine is your source for local soccer news in the Magic City. 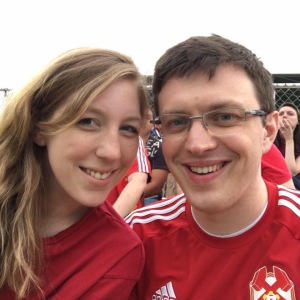 Simon is a British Football fan in exile, having moved to the States in the Fall of 2015. He lives in Birmingham with his wife, who he is still determined to convert to soccer fandom.

I’ve been surprised how much I’ve missed it. Singing in the terraces of Ashton Gate, the humble home of my hometown club, Bristol City. Or, as the case was in 2008, singing it loud and proud at the home of football – Wembley Stadium – during the agonizing 2008 Playoff Final defeat to Hull City that saw my wildest dreams of Bristol City playing in the Premier League come so tantalizingly close.

Now, don’t get me wrong, I hadn’t held a Bristol City season ticket for a while before leaving the shores of the UK to make a new home here in Birmingham, AL in the Fall of 2015, but football (I’ll let you know when I’m not talking about “soccer”) remained an important part of life – a topic of daily conversations, plural. That I miss even more.

Before we go any further, you need to know that I’m also a Manchester United fan. I swear some people back home still think I’m a glory hunter (read: bandwagon jumper or “Seattle Seahawks fan”) for supporting Manchester United.

The truth is that I knew about Manchester United before I did Bristol City – all thanks to my football-crazy Grandmother. She developed an affinity for Matt Busby’s United side following the Munich Air Disaster, an affinity that turned into a lifelong fandom and many happy afternoons spent shouting at the TV with her grandson. I watched United win two Champions Leagues with her – now that she’s passed, those memories are even more special.

Even in Bristol, miles away from Manchester, you couldn’t escape the Red Devils. I worked with two fellow United fans (neither from Manchester) and it wasn’t unusual for us to postulate about the post-Fergie decline over the constant clicking of keyboards.

You’d even catch me deep in footballing conversation at church – one of my pastors was a United fan (actually from Manchester) who once preached in his United jersey. I kid you not.

Safe to say, it’s been harder than I thought not to be surrounded by football. All the early Saturday mornings on NBC can’t replace being in a culture where it was a way of life. It’s been harder keeping up with United than I’d hoped despite the surprisingly extensive coverage and it’s pretty much impossible to keep up with Bristol City outside of checking their score on the ESPN app.

That’s the void the Hammers have the challenge of filling. And that’s why I’m excited to be a part of the Magic City Brigade this year – I attended every home game last season, but I really wanted to be in the red and yellow corner, with the flags a-waving and the flares a-glowing.

I wanted to join in with the new songs (it really is very simple, I wanted to go “freaking mental”) and be a part of the in-jokes (“be stronger!”) But these antics, familiar to me, seemed to be met with everything from amusement to confusion by the rest of the general admission crowd. That’s no disrespect to them –Birmingham hasn’t been educated in football culture, at least not yet.

But there’s hope. I look to the incredible scenes at any Portland or Seattle home game with raucous crowds and stadium-sized flags that make the mural on the ceiling of the Sistine Chapel look like a finger painting. Some parts of this great country get it – I’ve even been pleasantly surprised by Atlanta United – both on and off the pitch.

Then there’s the infrequent – but oh so precious – interactions with fellow lovers of the beautiful game. In fact, one of my most bizarre experiences since moving here was hearing an Arsenal-loving store assistant reliving Sylvain Wiltord scoring a title-winning goal at Old Trafford as I picked out a pair of khakis.

And then there’s Chattanooga. Regular readers of the Backline might be tired of the Bham-Nooga comparisons but, quite frankly, they are THE model for the Hammers.

I’m not aiming for Atlanta United right now. I’m aiming for Chattanooga FC. Success on the pitch whilst also taking advantage of a town without a pro team to build true grass roots support.

There’s much to be done even to reach that modest dream, but for now, I’m excited to be a part of it from (nearly) the very beginning. So, look out for me on Saturdays this summer in my red and yellow scarf. Listen out for me singing the new songs in a funny accent. I’m a British football fan in exile, and I hope I’ve found my new football home.

If you are interested in becoming a Guest Blogger on the Birmingham Backline, click this link and learn about the opportunity to share your thoughts on local soccer with a growing readership in the Magic City.