Here we go… just two more days before Memphis City FC hosts our Birmingham Hammers in a match that will determine which new franchise claims the upper hand in this early NPSL season. Honestly you guys, this game is a litmus test for the Hammers as they face off against an opponent in very similar circumstances. Both clubs round out the bottom of the table with MCFC on 1 point and the Hammers on 0 points. Both clubs are in the initial seasons in the NPSL. And both clubs are coming off a somewhat underwhelming performance where they had a player sent off. Not exactly how either franchise wished to start their inaugural seasons.

But there is room for optimism. MCFC has looked good enough against Little Rock Rangers and the Houston Hurricanes. Birmingham sat Sandy Springs FC down in proper order before running neck and neck with Chattanooga FC. All is not lost this year for either team. Look at the table: 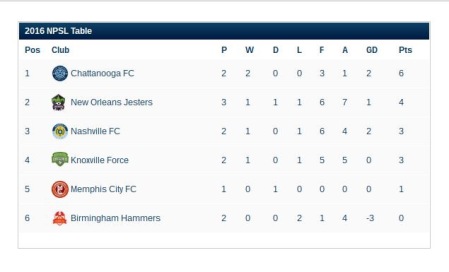 A win for either team puts them right back in the thick of the Southeastern Conference race. There is still plenty of soccer to play. But whom am I kidding. MCFC is going to be sitting at the bottom of the table come Friday and I will tell you why in my specific predictions below. 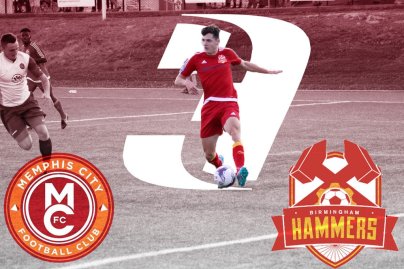 1. This matchup is destined to become a shootout. Both teams have starters on suspension due to red cards last weekend. The Hammers’ defense has been inconsistent at best this year. And although MCFC has pitched two clean sheets in a row (Houston and New Orleans), I think they are due for a flood of goals scored against them as well. Yeh, yeh, yeh. I am going against the data here, but my gut feeling tells me that this is still Division 4 soccer. And MCFC is still a young/inexperienced club like the Hammers.  Coach Joel Person will have the throttle opened wide, so look for at least 4 goals to be scored in this game between the two teams. We are looking at a 2-2, 3-1, 3-2 type of outcome.

2. I think James Ngoe makes his mark on Thursday night. Look for a goal from the winger/forward. Ngoe was active against the Knoxville Force last weekend with a ton of good movement on and off the ball and a nice shot on target. The Hammers know that they have to start putting the ball in the back of the net if they are going to make a run for the playoffs. There is no better chance to start the engine than on the road, mid-week, against a team that is floundering a little. Ngoe is crafty and will be the difference on Thursday evening.

3. I like #instantlegend Karl Chester with an assist in this game. Is Chester a little banged up? Possibly. Has he not been quite up to form yet? One might say so. But I believe he makes the trip to Memphis and plays his best game of the season. His footwork inside the attacking third has always been something to envy. I think he puts it together against the Rogues.

Final Score Prediction: As stated earlier – I think the flood gates will open up a little bit. Both teams will be pressing for a victory, leaving the defenders exposed. I say the Hammers win… wait for it you silly Chattahooligan trolls… 3-2.

Earlier this week, I challenged you to come up with your own specific predictions for each game. At the end of the season, we will count up all the correct and incorrect forecasts and see if you guys were able to do better than me (I highly doubt this, by the way). I plan to win. Otherwise, the Magic City Brigade gets to have a little fun at my expense. Think ice-bucket challenge.

Each week, during my prediction columns, you will have a chance to make your specific predictions as well. You can comment below in the article. You can send them to me on the BBL Facebook page or on Twitter (@bhambackline). Or, you can send me an email: bhambackline@gmail.com. I will cut off the predictions 1 hour prior to kick each week. Here are a few that I have received so far this week:

Birmingham Hammers: The rebuttal pick and they take themselves to win 3-0. I like this one!

My personal favorite Chattahooligan El Conductor (@elcomish on Twitter): Predicts the Hammers win the rest of their matches 2-1. I feel the sarcasm falling off his keyboard, don’t you. Magic City Envy shall be his diagnosis.

Forrest Collins of the Magic City Brigade: Predicts the Hammers to win 3-1. This man knows how to get specific too: he says the goal scorers are going to be Alex Brown, Karl Chester (good choice), and Norris Howze. He also thinks that MCFC will give up a penalty kick. Smart lad this Forrest.

Collin Barnwell of the Magic City Brigade: Predicts the Hammers will win 2-1. He likes Anthony King and Norris Howze to be the goal scorers. In fact, he specifically likes Howze to score by the 15th minute and King around the 70th minute. My man, if you get these right, big props.

You still have time to get  your predictions to me. I will add them to the list as they come in. Y’all – this is soccer. It’s supposed to be fun. Make a prediction or two!