Well folks. The weekend is upon us. And you know what that means… Hammers Soccer! And man alive, we’ve got an exciting one this weekend. Where will you be this Saturday evening at 7PM? If you are reading this blog and you live in the ‘Ham, I for damn sure hope you’ll be at the SHAC cheering on your Boys in Red as they take on Chattanooga FC. And bring a friend or two or twenty. The more the merrier. The weather looks ideal, the tailgate is on, and the Magic City Brigade will be singing and serenading, creating a proper atmosphere for soccer in the South. Won’t you join in on the fun? 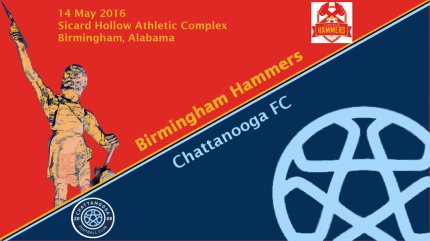 1. For those uninitiated to the dynamics of the NPSL, CFC is the golden standard for organizations in the 4th level of the US Soccer Structure. They play their games in a converted football stadium in downtown Chattanooga, often drawing near capacity crowds. They have played in the NPSL championship match in 4 of the last 6 years. Last year, they hosted the ultimate match in front of 18,000 of their loudest fans. So this team has firepower in all aspects of the organization: their bank account, their on-field talent, their supporters group. As a Hammers supporter, the question on my mind is what strategy Coach Joel Person will go with against the Goliath Chattanooga FC. Do you attack CFC and try to get the jump on a team that is still trying to find their sea legs in the early season? With this strategy, you will risk exposing what has  been a weak spot thus far this season: the Hammers backline. No, I think Coach Person will be more conservative in this regular season opener. Three points are at stake. Therefore, the Hammers cannot afford to give up more than one or two goals if they expect to get a result at home. Look for the Hammers to ‘park the bus’ with a defensively minded 4-5-1. Chattanooga will maintain much of the possession and the Boys in Red will look to break them down with their counterattacking.

2. Norris Howze will play a critical role in a Hammers goal. The defensive midfielder is the place setter for the Boys in Red. I imagine two different scenarios: 1. Howze will make a critical tackle in the midfield, win possession for the Hammers, make a professional-level outlet pass to a winger that will lead to an assist and a goal. Or, 2. Howze will step up to a free kick near the CFC 18-yard box and slam a ball into the back of the net. Mark it down boys and girls, Howze will be the class of the Hammer’s lineup on Saturday night and will win Man of the Match honors.

3. Something tells me that the Magic City Brigade is up to something for this game. The CFC supporters are traveling down in a bus and will be loud and obnoxious. In a show of pride and might, the Brigade will not be outdone by these invaders. In fact, I keep getting cryptic messages from the Brigade this week with obscure images, one of which I have shared above. What is it? Don’t you want to be at the SHAC to find out? I do. The best seats in the house are on the far side of the pitch with the Brigade. Make sure you get there early. As for the rest of the Hammers fans… I believe that the atmosphere at this match will be the best one Birmingham has seen since the US Women’s National Team was here last Summer. Listen to the singing, the cheering.  Look at how many like-minded, soccer-loving people live right here in the Magic City. Think about what this team could be if it continues to grow. Take a moment before the opening kick and just breathe in the scene. And then scream your head off for your Boys in Red.

A lot is said about the strength of Chattanooga FC, and for good reason too. This team has earned the respect of every team in the NPSL Southeast Conference. They are so good in fact, that their continued NPSL success has given birth to a spot in the US Open Cup. Chattanooga has received a lot of media coverage over the last 2 years for their efforts on the field. Could their mind be on the upcoming May 18th US Open Cup match against Reading United A.C.? Does CFC value a strong US Open Cup performance more than 3 points in the opening match of the NPSL season? My bet is that the upper-brass at Chattanooga FC want to make a run in the big national tournament. A victory for CFC in the Open Cup is more valuable than the first regular season match against the Hammers, right?

And this fact, my friends, is where the Hammers have the edge. The atmosphere is going to be lively. The Boys in Red have two hard-fought preseason friendlies under their belts and will start putting things together this weekend. The Hammers are facing a strong team whose heads may be looking to a national tournament match still 5 days away. Birmingham has the personnel to take advantage and will put 2 goals on CFC and take the game 2-1 at home.

← Hammers vs Chattanooga FC: You Never Forget Your First
Chattanooga wins on the field, Soccer in the City of Birmingham wins off the Field →