I woke up this morning in great anticipation for the first game of my beloved Hammers’ 2016 season. I had organized a tailgate of about 30 people and was looking forward to spending the afternoon talking/watching soccer. I just knew the day was going to be perfect. Not too hot, sunny with a bit of cloud cover, and certainly no rain. Iconic local weatherman James Spann had a different idea about how my day would go. His morning weather forecast called for scattered showers hitting the metro area around 5-7 PM. Prime tailgating time and, of course, game time. I watched the radar throughout the morning and into the early afternoon. A big green mass of rain was coming our way. In desperation, I tweeted ol’ Mr. Spann and asked him if there was a chance all the rain would just disappear before it reached Birmingham. His response, “always a chance, but it looks wet.”

I’ll take my chances, thank you very much!

The tailgate went off without a hitch. And just as I had hoped, what once was a big green mass of nasty rain on the radar became just a hint of its former glory as it hit the Appalachian Wedge (an astute member of our tailgate developed this term after a beer or two today. It totally sounds like a legitimate geographical/meteorological term if you ask me. Take that Mr. Spann!) 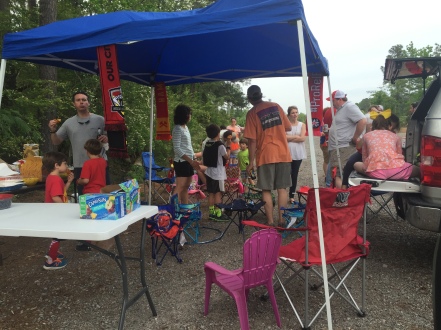 As for the game against Sandy Springs FC, we were treated to a scoring-fest. Seven goals in total. Five for the Boys in Red. Two for team from the vast Atlanta sprawl. I’d say for the 700-1,000 or so folks that did not trust the early morning weatherman’s prognostication, we got great value for the cost of our tickets. 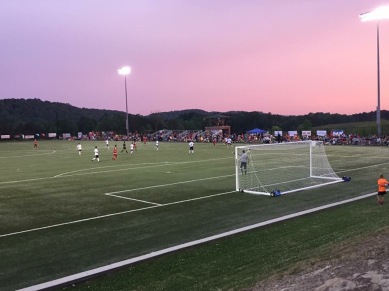 5. The tailgate. We set up shop with the Magic City Brigade. We had plenty to eat, music, adult beverages, and great conversation. What was planned as a 30-person tailgate turned into about a 45-person tailgate. We hope it turns into a 100-person tailgate in two weeks. People of Birmingham, consider this your invitation to come early and stay late on May 14th for one hell of a tailgate party. Or make plans with your friends and family for your own tailgate. It’s a great way to spend a Saturday afternoon/evening. And the Hammers will need your support as they take on Chattanooga FC.

4. The sunset. After all the worry about the weather and organizing a tailgate, it was nice to just sit down and watch some soccer. And the beautiful rolling hills of the southern metro provided the ideal backdrop for the beautiful game, especially with the sunset casting a majestic array of hues across the Magic City sky.

3. The Magic City Brigade. The Brigade is a slice of what makes soccer so popular across the world. The atmosphere that a supporters group provides the game is so important. And this supporters group loves its Hammers soccer. It loves its city. And it has a drum. The Magic City Brigade members sing songs, haggle the ref, and most of all have a good time. Oh, and the supporters even take the time to let curious little fans bang on the drum. Good job Brigade! 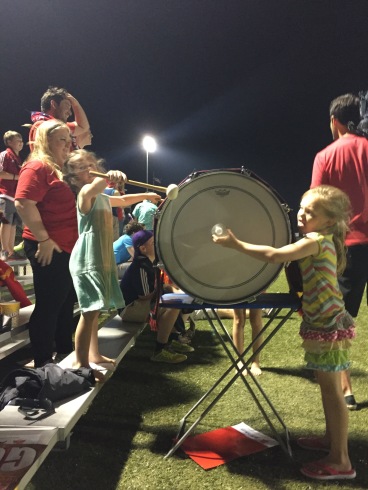 2. The game day execution. Stay with me now. This highlight is mostly about the behind the scenes operational execution by the Birmingham Hammers. Parking was a breeze. Ticket purchasing was seamless. The concession stand provided excellent ballpark food essentials, especially the frozen ice cream dots that the kids love so much. Security held the sideline in order, but was not overbearing towards the fans. In fact, they were quite kind. I imagine that there are so many things that can and probably do go wrong when it comes to putting on this type of event. But from this fan’s perspective, the evening was perfect. Good on you Hammers!

1. The Goals. Of course the number one highlight is the actual game played on the field. And without a doubt, the Hammers played an exciting brand of soccer tonight. Everyone likes to see goals when they go to a soccer match. Sometimes they are hard to come by. But not tonight… not for the Hammers. Julio Noel got the scoring started in the 34th minute, followed almost immediately by James Ngoe in the 35th minute. Anthony King had a brace with goals in the 78th minute (which put the good guys in the lead for good) and in the 80th minute. By the way, his 78th minute goal was a thing of beauty, as he chipped the Sandy Springs Goalkeeper from about 25 yards out. And finally Norris Howze closed out the scoring with a free kick goal in the 90th minute.

This game provided a fun experience for all who attended, with the exception of our brethren from the ATL in Sandy Springs FC attire. This match was just a friendly. The next opportunity to see the Hammers play in Birmingham will be in two weeks, and it will count towards the conference table. On May 14th, perennial NPSL power Chattanooga FC comes calling. Plan to come out and support your Boys in Red for that one.

Did you attend the game this weekend? What were some of your highlights? Share in comments below.